The cinema played an important part in my youth, for so many reasons.

For someone growing up in the Fifties in Georgetown, in what was then British Guiana, it was the main form, perhaps the only form  of entertainment. It’s importance and impact on our culture and development cannot be overstated.

Here are some recollections of what it was like.

[Comments and similar recollections invited from readers for moderation. Subject to editing].

My memory goes back far enough that I recall the price of a ticket back in the Fifties. We were still on the Sterling currency in those days and a ticket to see a movie cost Half-a-bit, which would be four cents. A Bit was eight cents. A Bit-and-a-half was twelve cents. A shilling was the next denomination. These were all silver coins, minted obviously in the mother country—England. —Ken Puddicombe.

My memory of film and cinema takes me back to the 50’s in what was then British Guiana.  I was a young lad and through my little brown eyes I saw the greatness of a movie through actors who were my idols. To me, the importance of a movie was not in the costumes, screenplay or special effects, as I was too young to be discriminating back then, but it was in the good guy triumphing over the bad, with the best scene being a showdown at the end—Baz P

My very early years in Georgetown were spent being “dragged” by my mother to the cinema to see an Indian movie.  She understood what was being said but I was totally lost, apart from the fact that I, in my childish dreams,  adored the then male “heartbreak” actor, Dillip Kumar. If only I could understand what they were saying! —Elaine Gardiner.

When Ben Hur was released in 1959, it was shown at the Empire in Georgetown. The cinema was closed for a week or so prior to the release of the movie as the management was in the process of upgrading the cinema with a “silver” house curtain and stereophonic sound, a first for British Guiana. The sound was most impressive during the anti-climatic race when the chariots were coming around the oval, the speakers to the left and right of the auditorium reflecting the movement of the chariots, creating an indelible memory of cinema stereo in its early days—Ken Puddicombe.

The western will always be my favourite for who can forget Shane, Django, One SilverDollar, Kansas Raiders and so many others. The heroics of Shane (Alan Ladd) vs  Wilson (Jack Palance) (“I’ve heard that you’re a low-down, yankee liar”) with a booom-booom sound as he went tumbling under some barrels with his black gloves still on. The likes of Audie Murphy, Guiliano Jemma etc all showed the survival of good over evil. Nevertheless, without the bad guys whom we always know from the beginning will die in the end we should also give them some credit or our movie would have been less entertaining without the likes of Neville Brand, Roy Bancroft, Lee Van Cleef and snake eye., Jack Elam, Henry Silva, should not be forgotten—Baz P 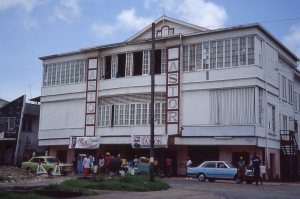 Over the years, I saw many movies at the Astor in Georgetown. It was noted for showing epics on its big screen and it was where I first saw Cecil B. DeMille’s Ten Commandments and John Wayne’s The Alamo. The cinema was located on Carmichael Street, opposite the Globe Cinema —Ken Puddicombe

POSTSCRIPT: 13th January 2019. On my recent visit to Guyana, the structure of many of the large cinemas in Georgetown can only exist in your imagination, now. Where the Astor and Globe stood, are now garbage strewn lots. The Empire is now a mini-shopping mall. A few, like the Rio and the Strand, have been converted to places of worship. I visited a large shopping mall—Giftland on the East Coast and Guyana is now seeing a resurgence of cinemas in the multiplex format, showing up to date releases seen in North America.

One would never have thought that at such a tender age ., then growing into teenage years., becoming a young man into adulthood the memories will prevail and still be there. Yes, the big screens of Rio (Capitol) .,Olympic, Strand, Metropole, Astor, Globe, and  Empire rejuvenates in our hearts when we see the DVD formats of what we all experienced so many years ago.

Those memories have truly followed us from one continent to another: the memory of saving a few coins for we just had to see a western: one of my special memories was waiting for it to get dark., disappearing by jumping our fence in La Penitence village., standing  outside Rio to await the windows opening which they did because of the heat., then bobbing and weaving with my body going from side to side as there were others standing there and the object was to be able to see the likes of a chapter of G Men vs the Black Dragon which was a serial in those times. The main Gman was Rod Cameron., neatly dressed in a suit with a felt hat. —Baz P

There was a time when movies were not shown on Sunday in Georgetown. I imagine the same law that prohibited the sale of alcohol on the Lord’s Day applied to movies in that era. Eventually, back in 1957, something brought about a change and the restriction on movies was lifted. I can recall my great joy at being able to see a movie at this time. I can even recall the movie: Tammy And The Bachelor with Debbie Reynolds. It showed at the Astor. —Ken Puddicombe

There were also times well worth it when I bent down underneath RIO to see a movie between the creases of the floor boards. To hear the car with a loudspeaker on top driving through the village saying what is playing at the cinema drove a certain feeling into your body and soul which with a little imagination still rings in the ears to these days.

As one became older the bodily challenged also arrived: the wanting of buying your own ticket and being independent of everything tantalized the inner being to challenge the ticket boot: the shoving pushing ,smelling  in a contained box line up in the stalls was a new adventure. To get your hand into a tiny opening and not lose your coins was indeed the challenge of an academy performance. Your main contenders were bald headed BARNEY, well over six feet and a known aunty man assisted by his compadre Potato Ball.  They monopolized the small area and being in there you would get a feeling they belong to the “feel up”and  scalpers’ association. —Baz P

PIT, CHANNA, AND BUGS! Is only one place in BeeGee where dese three things come together – at de cinema, or “tayta” (theatre) or “matinee” as we used to say. You sit in pit, stalls for some, because that’s all a “bit” (eight cents) can buy. Hard long wooden benches wid a single back-rest that was too high for a kid to support his back. Benches were fixed on a level floor and if you unlucky to sit behind a big-head guy, you could miss Trigger’s galloping legs but enjoy seeing Roy Rogers crouching on de horse, his white hat glued on his head, as he furiously chases the black hat crooks and shoots his golden-handled gun non-stop. At Monarch, Oldie used to sell de channa sprinkled wid wiri-wiri pepper sauce. Or, you can get his oil-soaked bara wid tamarind sauce. This used to go down real good while “Oh My Papa” played overhead and we wait for de lights to dim and de screen to come alive. But as soon as de place get real dark and still, you start scratching you back and foot. The bugs come out and it’s time for them to eat! But it doesn’t matter. By now, Roy Rogers and Gabby Haynes catch up wid Snake-eye and e gang and de licks now start! —Ram Angod

One thought on “A Cineaste Remembers…”

This site uses Akismet to reduce spam. Learn how your comment data is processed.

Thatched English cottage. Three hundred years of history and a way of life!
Framed against a cloudy Autumn sky. Right time. Right place. The gym!
My African Violet hasn’t looked so good in years. Must live that position!
Coming soon on amazon
Michael Joll’s latest book is a collection of eight Murder-Mysteries set in colonial Malaysia in the early twentieth century.
%d bloggers like this: